We’ve already spoken about different skills that supply chain managers must have. However, in the information age, one of the most critical tools for management positions is data execution. It’s not just about supply chain visibility  in a dashboard, regardless of its integration, but to make informed, forward-looking decisions with raw data or indicators.

In 2014, the movie “The Imitation Game” portrayed artificial intelligence (AI) pioneer Alan Turing’s efforts in World War Two, to develop an algorithm and a machine to decode in a timely way Nazi intelligence messages.

His success depended on not only in data visualization, but in making informed decisions about them, with an analytical, deductive capacity, and  criteria which only critical human reasoning can make:

Turing is not only one of the founding fathers of information technology but one of the predecessors of a rising 21st-century management technique: “business intelligence“. A good manager requires quick and timely analysis, logical and critical asessments with the use of its data, alerts and signals.

Today, any value proposal from any company is not only based on the product or service but customer segmentation, considering attributes such as integrated business planning.

This is highly critical when we consider that a decision can have system-wide causes or consequences, either direct or indirect. Route optimization doesn’t only depend on monitoring and visibility fleet tracking systems. A route planning problem can come from multiple factors, and a correct or rushed decision can have several unplanned consequences.

When logistics intelligence allows interaction, the channels is to work with high volume o data to analyze promptly.

What challenges do you see in analysis from supply chain managers? What elements do you think a route optimization software can assist or not? We appreciate your comments and suggestions. 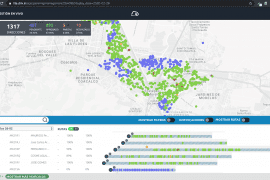